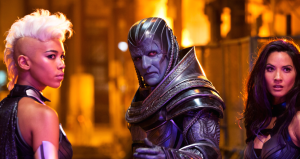 After the re-emergence of the world’s first mutant, world-destroyer Apocalypse, the X-Men must unite to defeat his extinction level plan.

The X-Men movies have gotten to be about as confusing as the X-Men comics. With the last movie the timeline was changed so I guess the first movies no longer matter, so the fact that Mystic, Lawrence, was going to become bad is no longer true? Maybe? I’m not sure and I don’t know if she is either which makes the ending a bit weird.

It’s probably best to completely forget the movies that don’t have McAvoy and the others in them because who the hell knows where they come into play if at all.

X-Men Apocalypse was fun, though it bounced around a lot and I was never quite sure where we were time wise. Quicksilver, Evan Peters, was again my favorite part even though I’ve seen a gif of his main scene several times at this point.

The ending was pretty massive, destruction on a worldwide scale, so it will be interesting to see what happens in the next movie. However, this franchise barely registers with me now so it’s not something I’m dying to see.