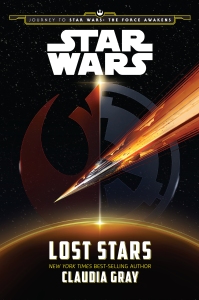 A long time ago in a galaxy far, far away…

Eight years after the fall of the Old Republic, the Galactic Empire now reigns over the known galaxy. Resistance to the Empire has been all but silenced. Only a few courageous leaders such as Bail Organa of Alderaan still dare to openly oppose Emperor Palpatine.

After years of defiance, the many worlds at the edge of the Outer Rim have surrendered. With each planet’s conquest, the Empire’s might grows stronger.

The latest to fall under the Emperor’s control is the isolated mountain planet Jelucan, whose citizens hope for a more prosperous future even as the Imperial Starfleet gathers overhead…

Wow was not expecting this when I picked up a young adult Star Wars novel. I’d heard good things, but I still didn’t expect to have a book that so capably portrayed both sides of a conflict. Gray showed how two people raised on the same planet with different ideals could look at the same things and come to different conclusions. It didn’t make one better than the other either. Yes one ended up on the “right” side, but you could see clearly why the other was still on the “wrong” it was very well written.

From the start I suspected that the ending would be sad and when I got to the halfway point I thought it was pretty much guaranteed but I ended up being pleasantly surprised. I wish there’d been a bit more, but the ending was touching.

Very happy with this book and I’d highly recommend it to anyone who’s a Star Wars fan, no matter what the age.