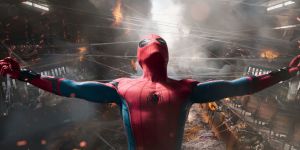 Peter Parker balances his life as an ordinary high school student in Queens with his superhero alter-ego Spider-Man, and finds himself on the trail of a new menace prowling the skies of New York City.

I have a confession, I am not a Spider-Man fan. I used to be, I liked the first two Tobey Maguire films, but then I was young and stupid and knew nothing. I’ve seen the Amazing Spider-Man movies as well, pretty sure I’ve got reviews posted here for them. The thing that makes me not a fan of Spider-Man, though, is the one time I bought one of his comics it was in the middle of a story arc and he chose Aunt Mae over Mary Jane and I could not comprehend. Ever since I’ve thought of Spider-Man as an idiot and scoffed at his stuff.

Now that’s out of the way I can tell you that I really liked this movie. It nailed the tone of what I feel a Spider-Man movie should be like based on people I know that can’t shut up about him. It was funny, it was a good story, and the teen angst wasn’t overwhelming. Michael Keaton as a villain was great, so believable. You do things to take care of your family. His suit was awesome looking too. Falcon will forever look like a joke after Vulture. Love that Tony Stark was the catalyst for this whole problem. Do not like Tony Stark.

I was afraid that there would be too much Iron Man in the movie, but they did a pretty good balancing act. Peter, Tom Holland, learned how to stand on his own, so that’s good for future movies.

I did not like that almost all of the big scenes were in the trailers, there were almost no new scenes with Spider-Man showing epic levels of skill. Getting tired of that, trailers are becoming highlight reels instead of showing just enough to grab your attention and make you want to watch.

Anyway, I ended up buying the blu-ray after watching this from Red Box and have already watched it again. Spider-Man: Homecoming was a great movie and the start of what I hope is a successful series.