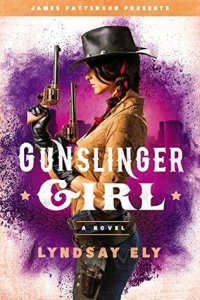 Seventeen-year-old Serendipity “Pity” Jones inherited two things from her mother: a pair of six shooters and perfect aim. She’s been offered a life of fame and fortune in Cessation, a glittering city where lawlessness is a way of life. But the price she pays for her freedom may be too great….

In this extraordinary debut from Lyndsay Ely, the West is once again wild after a Second Civil War fractures the U.S. into a broken, dangerous land. Pity’s struggle against the dark and twisted underbelly of a corrupt city will haunt you long after the final bullet is shot.

I devoured the first seventy percent of this book. The world was relatively interesting, the characters were fine, but most of all, for me at least, it was a western led by a girl. I love westerns with female leads.

The last thirty percent was a difficult slog, though. I had never cared about the characters so when it really started to get emotional I did not care what happened, at all.

The book was a YA novel, I’m always harshest on them, for whatever reason. I honestly try to avoid them, but they seem to have the stories I want to read but the characters I fucking hate.

I didn’t like Gunslinger Girl. I wanted a female led western with a woman that didn’t need everyone to tell her what to do and wasn’t constantly just reacting to the situation. I wanted more than just a girl falling in love with a boy and doing everything for him.