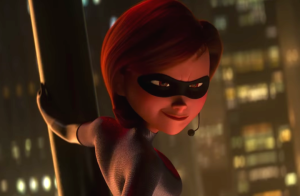 Bob Parr (Mr. Incredible) is left to care for the kids while Helen (Elastigirl) is out saving the world.

This is the first movie I took my daughter to see in theaters, because of that I did miss parts of the movie because I was focusing more on her and she does not know how to plan a bathroom break lol.

The Parr family is back and just as good as before, even after such a long break. This time around instead of a husband trying to relive the glory days he’s trying to take over the job of mom so that Elastigirl, Holly Hunter, can prove to the world that supers deserve to be able to fight crime.

I loved that Elastigirl got her chance to shine. She’s smart and capable and a total badass. In the first movie she was mostly a mom, just trying to keep everyone safe and on track, while Mr. Incredible, Craig T. Nelson, got to go out and save the day. She saved him, which was nice, but it was more of a mom thing than a superhero thing. In 2 she gets to have that superhero spotlight and you see why she was a beloved hero.

Mr. Incredible was very much in the traditional father role in the first movie. He went to work, backed up his wife’s parenting decisions (when he wasn’t accidently undermining them), and tried to find ways to hold on to his hero persona. The role reversal in The Incredibles 2 was a relief. He started out dismissive of what his wife did, learned he was wrong, and figured out the best way for him to handle things. He loved his kids and of course rose to the occasion.

Naturally, it took the whole family to save the world from the villain. We also got to see a whole new group of superheros as well as the most important superhero of all, Frozone! He’s my daughter’s favorite so she was super excited when he showed up.

There were some dark moments, but I wouldn’t say as dark as Toy Story 3, and a very long warning at the beginning about possible seizures, still I had no problem with my four year old watching the movie.