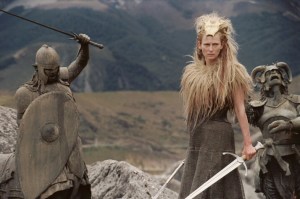 The Chronicles of Narnia: The Lion, the Witch and the Wardrobe (2005)

Four kids travel through a wardrobe to the land of Narnia and learn of their destiny to free it with the guidance of a mystical lion.

I saw this in theaters. I was a bit apprehensive because I loved the book series as a child, but I ended up loving this and was excited for the series. I ended up hating the next movies, and I’ll probably not watch them again to write a review.

Anyway, The Lion, the Witch and the Wardrobe is the story of four children escaping a world war to a house in the country. Unbeknown to them the house holds a portal to a magical world. It’s a sweet and amazing story, with father Christmas, a talking Lion that will save them all, and an evil white witch.

This is a children’s movie. You could talk about the heavy Christian symbolism and the lack of any racial representation, and it does, actually, bother me more watching it older, but it’s a kids movie. Kids save the day. Kids rule the world. It’s a fun movie, though, not as enjoyable as it once was.