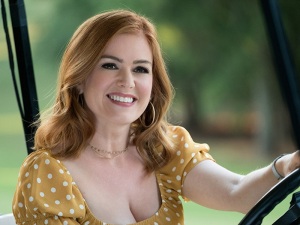 A small group of former classmates organize an elaborate, annual game of tag that requires some to travel all over the country.

This movie would have been better if it hadn’t been based on a true story. It was wild and crazy until the end where I assume it took a real world turn and then it became depressing and negated all of the fun from the first two thirds.

So five friends have held on to their childhood by setting aside the entire month of May to keep playing a game of tag. They live in separate parts of the country and are adults so they never know when someone is going to show up and tag them. This is definitely something that only works unless you all live in the same town or are wealthy enough to do a lot of traveling. If you were poor you would basically always be excluded or always be it. Which is why it would have been more fun if this wasn’t real world.

Anyway, one of their friends has never been it. I kept waiting for it to be revealed that he was a secret agent, but apparently he’s just that good. You actually never learn what he is so maybe he is a spy.

Hijinks ensue as the friends fight to finally catch him until we discover that one of the friends has cancer and is probably going to die. The movie ends without letting you know if he lives which probably means that he’s dead, which is the worst note to end what was otherwise an entertaining comedy. A comedy that involved lots of outlandish disguises, a fake pregnancy, and a ruined wedding. Seriously, why did they have to include the cancer? Why couldn’t they have kept it all up with the outlandishness?