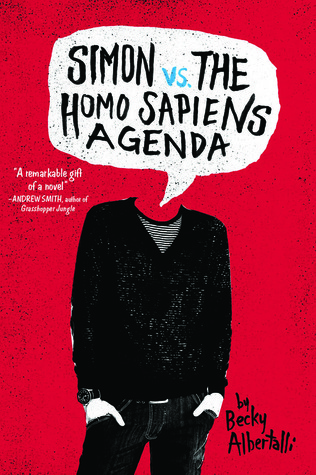 Simon Vs. The Homo Sapiens Agenda (Creekwood #1) By: Becky Albertalli

Sixteen-year-old and not-so-openly gay Simon Spier prefers to save his drama for the school musical. But when an email falls into the wrong hands, his secret is at risk of being thrust into the spotlight. Now Simon is actually being blackmailed: if he doesn’t play wingman for class clown Martin, his sexual identity will become everyone’s business. Worse, the privacy of Blue, the pen name of the boy he’s been emailing, will be compromised.

With some messy dynamics emerging in his once tight-knit group of friends, and his email correspondence with Blue growing more flirtatious every day, Simon’s junior year has suddenly gotten all kinds of complicated. Now, change-averse Simon has to find a way to step out of his comfort zone before he’s pushed out—without alienating his friends, compromising himself, or fumbling a shot at happiness with the most confusing, adorable guy he’s never met.

I decided to read this book after watching and LOVING the movie (review will be posted in February along with a ton of other romance reviews). The movie was the ultimate sweet romance, it had two people falling in love via letters which is how some of my favorite romances start. I was really excited to read the source material.

Simon is gay, but he hasn’t told anyone. When someone posts on his high schools Tumblr account that they’re gay he makes a secret email account and starts emailing them. Romance blooms.

Things get complicated immediately when someone sees Simon’s emails and starts blackmailing him. The blackmailer really sucked at it and honestly that whole line of plot was kind of rarely there, though, he did end up outing Simon who had to deal with the backlash.

The book was cute, but it was definitely a YA novel, with all the angsty teenage drama to go with it. What I loved about this book was seeing different starring characters. Seeing a gay teenager fall in love is unique in this day and age and definitely something to promote and normalize until it’s not a big deal when you see it.