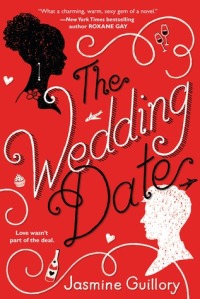 Agreeing to go to a wedding with a guy she gets stuck with in an elevator is something Alexa Monroe wouldn’t normally do. But there’s something about Drew Nichols that’s too hard to resist.

On the eve of his ex’s wedding festivities, Drew is minus a plus one. Until a power outage strands him with the perfect candidate for a fake girlfriend…

After Alexa and Drew have more fun than they ever thought possible, Drew has to fly back to Los Angeles and his job as a pediatric surgeon, and Alexa heads home to Berkeley, where she’s the mayor’s chief of staff. Too bad they can’t stop thinking about the other…

Alexa doesn’t like to describe herself as a prude, and after reading this story, I wouldn’t either. A better term is risk-averse. She tends to overthink things. This seems to work pretty well for her at work, but not so much in romance. She also has body image issues that I related to hard.

Drew is a commitment-phobe. He had a relationship that got serious before he was ready and now ends every relationship after just a couple of months. He’s a pretty boy doctor that doesn’t have an issue finding bedmates that are fine with that setup. Then he needs to find a date for the wedding of the woman he felt was his fallback when he was ready to settle down.

It would have been sooooo easy to hate Drew. He’s a lot of things that I don’t like rolled up into one character, but the way he treated Alexa overcame all of that. I liked reading from his point of view because I got to see that he only thought about the positives of Alexa’s body. All of the fear she had over it never even occurred to him. I also enjoyed that because she viewed this as a fling, she didn’t let those fears overcome her, and by the time she felt like it was more they didn’t matter.

The conflict worked out perfectly, and I had no issue believing it. I also enjoyed how things worked out with Alexa’s sister (which is great because I ended up getting the 5th book in the series from the library before all the others). The side characters seemed interesting enough, but they were not the main focus and only had small parts to play. The one I’m interested in the most is Carlos, so I hope he has his own book.

Finding love with the person you’ve been trapped in an elevator with is a pretty enjoyable trope and not overly done. The Wedding Date was a great start to a series and set my expectations high.