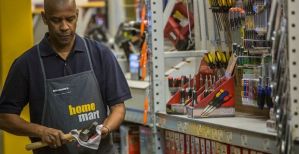 A man believes he has put his mysterious past behind him and has dedicated himself to beginning a new, quiet life. But when he meets a young girl under the control of ultra-violent Russian gangsters, he can’t stand idly by – he has to help her.

Really slow start. I get that we’re supposed to know he gave up “that life” but John Wick did too and he’d killed a bunch of dudes by the time Denzel gets around to it.

When the action finally did start it was poorly shot. You couldn’t see clearly what was happening and the images you could see were purely for shock value. The image of the corkscrew in that dude’s mouth was just stupid and sad.

This movie was so slow and boring, way too many non-action parts. It really had so much potential, and it just fucked it all away.

The shots where he “flashes” on important details before going into action were annoying and did not make me think the character was more of a bad ass. He also goes around killing all these people and doesn’t seem to care at all about finger prints and it seems like the kind of world that cares about those things.

I had the hardest time in finishing this movie and really wished I hadn’t wasted my time. The only reason I’m not giving it a one star is because I like Denzel Washington and I didn’t completely hate it, I just really hated it. 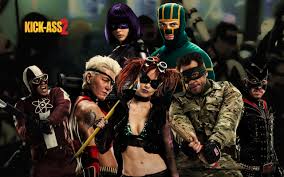 The costumed high-school hero Kick-Ass joins with a group of normal citizens who have been inspired to fight crime in costume. Meanwhile, the Red Mist plots an act of revenge that will affect everyone Kick-Ass knows.

I was lucky enough to be able to see this movie in theaters, but I was pregnant at the time and my hormones really messed with my perception of a lot of things. After a re-watch I believe I might like this more than I originally did.

Yes the scenes where Hit Girl is trying to figure out who she is are annoying, but then without those scenes I wouldn’t get the scene were those girls vomited and shit all over the place, and that was pretty damn funny.

It was also really violent, and while most of the time I don’t mind that, with this movie there were times I had to look away. Not sure why and I don’t feel like analyzing it at this moment to figure it out.

Overall I liked the story and the movie. I do find it funny that Jim Carey starred in this and then spoke out against gun violence. What a dick.