A group of young misfits called The Goonies discover an ancient map and set out on an adventure to find a legendary pirate’s long-lost treasure.

I missed The Goonies when I was making my Best Adventure Movies list. I’ll be correcting that shortly. It fits my definition of an adventure movie to a ‘T.’ A group of underdogs go on a quest to find the lost pirate treasure of One-Eyed Willy. What more could you ask for?

I can’t think of much to say about The Goonies. I have no thoughts.

It’s fun to see all these young actors since most of them went on to have active careers. I like the treasure and booby traps and all the character’s little quirks. The truffle shuffle is a bit fat phobic. There are probably a couple of other less-than-acceptable moments as well, there always seems to be in these older movies, but nothing stands out.

Reading over the Wikipedia entry, there isn’t much there either. They built a full-size replica of a pirate ship for the movie, then had to destroy it when they were done because no one wanted it. In the 120-page script, there was a scene with an octopus that ended up being cut, which explains Data’s comment at the end. A sequel has been discussed more than a few times, and it’s also been denied. Who knows? Does it even need one? No.

That’s all I’ve got. It’s a great movie, but my brain has nothing more to add to that. *shrug* 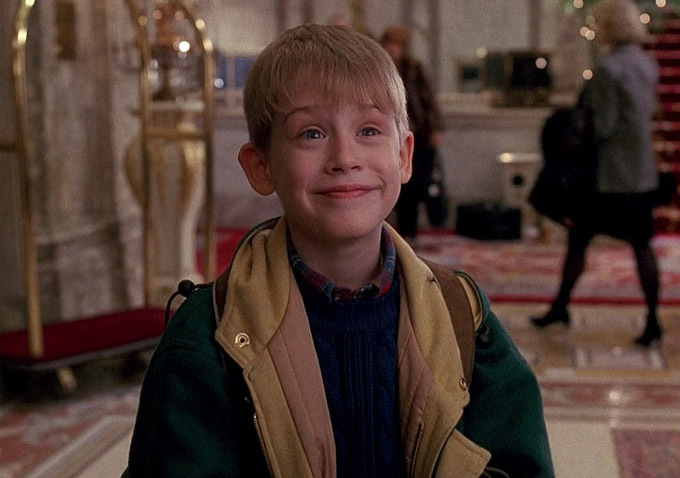 One year after Kevin McCallister was left home alone and had to defeat a pair of bumbling burglars, he accidentally finds himself stranded in New York City – and the same criminals are not far behind.

When I was growing up this was my favorite Home Alone movie. Kevin, Macaulay Culkin, gets to go to a big city, all by himself, go to a massive toy store, and eat tons of rubbish. Even as an adult he’s living my dream. Well, not really the New York part, but whatever, close enough!

Now, watching Home Alone 2, I don’t view it as positively. There is, of course, the taint of seeing Donald Trump in a beloved classic, but there’s also the fact that Kevin gets pretty extreme in his booby traps. Holy cow he would have killed the bandits many times over if it had been real. Definitely darker than the last.

I like to think that after this movie the whole family decided no more holiday traveling and they got Kevin the mental help he needed. Hopefully, he was able to live out a long, loving life, without needing to defend himself or his family from criminals that wanted to kill him. Who knows, though, maybe the Sticky/Wet Bandits broke out of jail again and finally got to seek their revenge. It’s not like anyone else knew exactly what Kevin did to them this time around.

An eight-year-old troublemaker must protect his house from a pair of burglars when he is accidentally left home alone by his family during Christmas vacation.

This is a classic Christmas movie that I watch every year. As I’ve gotten older it’s taken on a new light. I still marvel at the ingenuity that Kevin, Macaulay Culkin, is able to manage in protecting his home, but I’m also amazed his parents didn’t beat him. The fact that he didn’t kill the Wet Bandits, Joe Pesci and Daniel Stern, is remarkable and something that never even occurred to me when I was young. The language is a bit crude and now I worry that my daughter will pick up bad words, but I honestly can’t not watch this every year.

As a child I wondered if I would be able to pull off something so amazing. As a parent I know I would go to the same extremes as his mother, Catherine O’Hara, if not more if I somehow managed to do the unthinkable.

If you have somehow managed not to see this definitely check it out. I hope you enjoy!