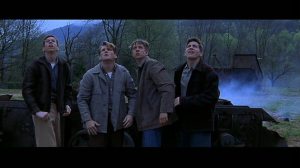 The true story of Homer Hickam, a coal miner’s son who was inspired by the first Sputnik launch to take up rocketry against his father’s wishes.

Homer Hickam Jr., Jake Gyllenhaal, does not want to work in a coal mine, but has been born into a coal mining town and family. His brother has found his way out with sports, but Homer is not athletic and ends up failing to secure a spot on the football team. Dejected he feels as though there is no way to escape, while his friends and family are telling him to accept the inevitable.

Around this time Russia launches Sputnik and Homer gets the idea to make his own rocket. He doesn’t really think there’s a future there, at least I don’t think he does at first, but it gives him something to think about that isn’t his bleak future. His friends being the friends that they are they help him out.

This is very much a feel good story, but having watched it after Hidden Figures I don’t consider it to be inspirational. It’s nice to see some boys from a poor town succeed and I did wonder what was in the water in West Virginia that is spawned so many math minded individuals during that time, but I didn’t get as much of a warm fuzzy feeling.