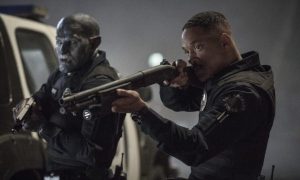 Set in a world where mystical creatures live side by side with humans. A human cop is forced to work with an Orc to find a weapon everyone is prepared to kill for.

I have been waiting to watch this for half the year. As anyone who’s read my book reviews know I am a fan of Urban Fantasy so I was very excited to see a movie coming out in that genre, especially one with a fair amount of money behind it. I was a bit concerned by the choice of writer and director, but since I’ve already got a subscription to Netflix it wasn’t a hassle to sit down and watch.

Daryl Ward, Will Smith, is a veteran cop that no one wants to work with, I assume it’s because of his personality though it’s never really expounded on and honestly he didn’t seem worse than the other cops. He’s paired up with rookie and first time orc cop Nick Jakoby, Joel Edgerton, who puts up with a ton of shit but since he’s still got the new cop shine he’s optimistic. It was actually super cute to see this cop that everyone hates either because he’s a cop, or because he’s an orc, or because he’s a unblooded orc somehow keep up his high spirits. He was young and hopeful and it was so sweet.

The world, at least LA, is not a nice place. The elves are rich, everyone else is poor, various gangs seem to rule. It reminded me of 80s LA or NY. Magic is there in the background, and there are magical beings like fairies and dragons, but it doesn’t really seem to be in the day to day.

I liked that a magic wand was equated as being like a nuclear bomb. I liked that there was a whole federal agency dedicated to magical stuff. I wanted more, though. There wasn’t enough world building or explanations. It was more of a cop drama with sprinklings of magic thrown in.

I liked the concept, liked most of the story, I just wish there was more magic. I’m glad they’re making another movie and I hope that it’s able to build on the world.