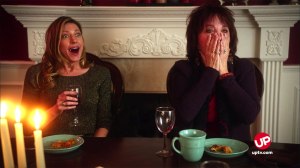 A high level executive must find herself a husband before Christmas in order to inherit a fortune.

So talk about a lovely setup. Grandmother is sexist and doesn’t believe women should run companies so she writes it into the will that once one of her granddaughters marries their husband will own the family company. Our lead female character, who has dedicated the past seven years to the company, is not the one getting married first, instead her flighty, pretentious sister is marrying an organic farmer with some ideas.

I liked that our female lead loved Christmas and family but was just focused on her career. I did think her parents and sister were stupid. I liked that it didn’t end with her getting married or even falling in love, the possibility was just there. Everything was resolved but there was actually room for a sequel if they wanted to do that.

Boyfriend that turns out to be gay, check.

The movie had a lot going for it, but the pacing was really off. It sped up some things and dragged at others enough for me to knock it down a star.