The Assassin’s Salvation (The Mandrake Company #3) By: Ruby Lionsdrake

When Jamie Flipkens signed on as a pilot and engineer for a small medical research company, she never expected to end up on a mercenary ship full of hulking soldiers who want to make her their latest conquest. The captain has been good to her–it doesn’t hurt that he’s her boss’s new beau–but she’s on the verge of quitting when a strange man shows up at her shuttle door.

Sergei Zharkov claims to be an old friend of the captain’s. He neglects to mention that he’s also an assassin, a dangerous man who even the hardened mercenaries avoid. Jamie should avoid him, too, but she’s drawn to the charm that sometimes escapes from beneath his grim facade. She finds herself wanting to give him a reason to smile–and maybe a little more than that.

The problem? There’s a fresh bounty on the captain’s head, and it’s possible Sergei is there to collect it.

I had a really hard time getting into this book. I liked Sergei, but I kind of wanted Jamie to end up with Striker. I wanted her to wake up and realize he was quirky or something. Instead she never liked him and he could be a bit over enthusiastic with his lewdness. Oh well, I like him.

Overall, I still like the series, but I wasn’t a fan of this book. 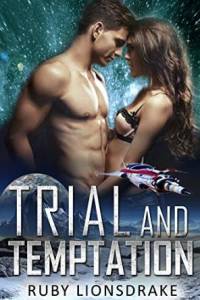 Trial and Temptation (The Mandrake Company #2) By: Ruby Lionsdrake

After ten years of flying freighter ships from planet to planet, Val Calendula never thought she would apply for a job as a combat pilot in a mercenary outfit. But her brother has gotten himself into financial trouble, and he’s heading to a mining prison if Val can’t pay off his debts. Mercenaries don’t always live long… but they make good money while they’re alive. A few combat bonuses, and Val could earn what she needs. The problem? She might have graduated from the military flight academy, but she hasn’t fought anything more dangerous than dust bunnies on the bridge lately. To make matters worse, the man in charge of hiring pilots was her instructor back at the academy. Commander Thatcher was almost as brilliant as he was arrogant and condescending, and he never seemed to think Val was smart enough to be there. She has no idea if she’ll be able to convince him otherwise now… or if she’ll be able to stand working with him. When Gregor Thatcher left the military, he never expected to run into any of his former acquaintances, much less the one he admired and mooned over during his two years teaching at the academy. Back then, he never told Val Calendula he cared for her, partially because officers weren’t supposed to have relations with cadets, but mostly because he didn’t know how to speak of his feelings. He might not have any trouble grasping navigational mathematics and astrodynamics, but people are more problematic. Gregor is elated that Val has entered his life again, but he’s fairly certain she hates him. Worse, he’s responsible for deciding whether she’s qualified to be a combat pilot. How can he judge fairly when his tongue tangles and idiotic words come out of his mouth whenever she’s around? When the captain sends Val and Gregor on a mission to pick up a military advisor and deliver him to a planet at war, Val hopes she’ll have an opportunity to prove herself capable of the piloting position. Gregor hopes he’ll have the opportunity to improve Val’s opinion of him. But when the military advisor goes missing, and they’re forced to divert to a dangerous moon base, the mission turns into a fight for survival. Val may learn too late that there’s more to Gregor than that aloof exterior… and that inside is a man she could love.
Review:

Really liked the hero in this book, he was very smart and had all the issues that comes with that. Think Sheldon from Big Bang Theory, only not quite so socially stunted. He was adorable and could still kick ass. I also liked the heroine and how practical she was. She had put herself in a perilous position for family and was obviously nervous but she didn’t let it keep her down. She rose to the occasion admirably.

Not much going on with the rest of the crew of the ship, but I’m really curious about what’s going to happen with Striker, I think that’s his name. I like him, but none of the women do. He’s randy and loves comics, what’s not to love?

Oh well, looking forward to the next book. 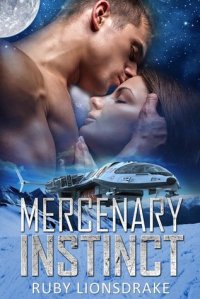 Skulking around in the ruins on a planet swarming with treasure hunters, slavers, and bounty hunters isn’t good for one’s health. But Ankari Markovich needs a few archaeological samples for her latest business venture, a venture that might prove lucrative enough to move her family off the impoverished planet where she grew up. Unfortunately, she has no sooner collected her samples than she’s captured by a band of brawny mercenaries. The captain might be handsome, but he’s intent on turning her over to some finance lord who has, for reasons unknown, put a bounty on her head, a ridiculously large one at that. If she can’t figure out a way to escape before she’s delivered to the lord’s home world, she could be forced into a life of indentured servitude—or worse. Captain Viktor Mandrake doesn’t usually take on piddling bounty hunting gigs, but when his intelligence officer informs him of a criminal on a nearby planet, he decides it wouldn’t hurt to take a shuttle down to collect the woman. But Ankari Markovich is trouble from the start, nearly eluding his elite forces, then fighting and tricking his people left and right. He finds himself admiring her spirit, but according to her warrant, she’s a criminal. The safest thing is to keep her in the brig and ignore her until she can be handed off to the man who wants her. But the situation grows more complicated when other bounty hunters show up, wanting to claim Ankari for themselves. Thanks to this woman, Viktor’s ship is in danger, his crew members are going missing, and he’s fighting enemies he never asked for in a jungle in the middle of a hurricane. He’s either going to strangle Ankari… or fall in love. Either scenario could get him killed.
Review:

I was not expecting to like this so much. It was really good and a fun read. I liked the characters and thought the world was interesting. I could see some Star Wars and Indiana Jones influence, which I of course loved, and I loved how strong the female lead was.

By the end of the book the couple was together, but nothing final, so there might be more about them in the future. The man was a bit monotone, but it was believable with his background. I did like the fact that he didn’t expect his crew to follow him in questionable decisions.

I’m looking forward to reading more about The Mandrake Company and I’ve already got the next book queued up.