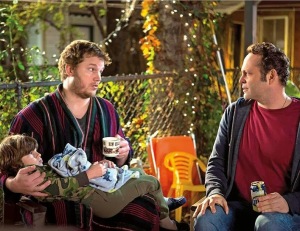 An affable underachiever finds out he’s fathered 533 children through anonymous donations to a fertility clinic 20 years ago. Now he must decide whether or not to come forward when 142 of them file a lawsuit to reveal his identity.

For whatever reason my local Red Boxes did not get many copies of this movie and it took forever to finally get to rent it. I started out just kind of wanting to see it but after being thwarted for so long I couldn’t stop thinking about it. Normally that would be a set up for disappointment but this was a solid 3 star movie.

There were just the right amount of feels for a comedy. Too often, lately, comedies have tried to be too emotional (I’m looking at you How I Met Your Mother) really shooting for that emotional moment and not delivering as well on actual comedy. This movie had the emotional bits but I didn’t feel overloaded.

Having said that there wasn’t as much comedy as there could have been. That’s what makes this a 3 star and not higher.