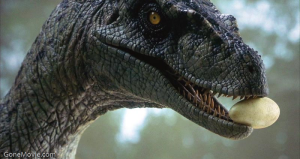 Stupid rich people. That’s kind of harsh, they were looking for loved ones, so I will excuse their actions. I would have potentially done the same thing. Well… I would have never let my loved one do something that stupid. Bunch of god damn idiots.

Why does everyone have to scream in this movie. I mean holy fucking shit people, how many times does it take for you to learn?

Didn’t like the pretty boy character because he was an idiot. I don’t think there’s a movie Téa Leoni has been in where I didn’t hate her character and this movie was no exception. So glad they finally went back to a good female character in the new one, tired of these idiots.

They were constantly hearing shit I couldn’t hear and I swear the volume was turned up so no idea what was going on with that. Maybe I’m going deaf in my old age, I hear twenty-nine is the new sixty.

Honestly, the movie is super underwhelming, especially after seeing the new one.