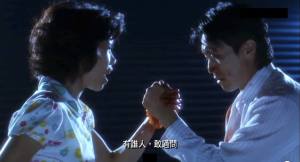 The most renowned and feared chef in the world loses his title of God of Cookery because of his pompous attitude. Humbled he sets out to reclaim his title.

The plot synopsis isn’t quite right. I don’t think he becomes humbled until the very end when a certain event happens. Just losing his empire wasn’t enough to do it.

It did feel a little dated, but only in video quality. I didn’t watch it dubbed, I prefer subtitles, so I don’t know how good the voice acting was. There were a few instances where they would zoom in on something written but there was no translation.

Overall I really liked the movie and it made me want to re-watch Kung Fu Hustle.