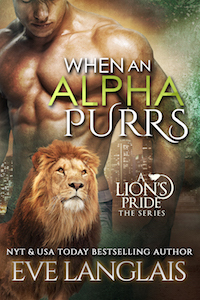 When an Alpha Purrs (A Lion’s Pride #1) By: Eve Langalis

A lion’s pride isn’t defined only by those he commands but also resides with his hair, so when a human dares to butcher Arik’s mane, he gets his revenge—and claims her as his mate. A billionaire CEO and leader of the largest East Coast pride, Arik is a ladies man and a lion. Used to commanding others, and obedience, he can’t believe it when a hairdresser with tempting curves chops off a hunk of his precious mane. But her biggest mistake is in running from him. Run as fast as you can, little mouse, because this cat loves to chase—and pounce. Oh, and he also likes to nibble on tender bits. What he doesn’t expect is to fall for a human woman, a woman who can make the impossible happen because everyone knows lions can’t purr…until now.

As soon as I finished the last Kodiak Point book I pre-ordered this one. I was definitely in the mood for a funny shifter book and this filled that need.

I liked how arrogant Arik was, normally it could have irked me but he was just so funny and ridiculous I couldn’t help it. Kira was fine, but was the weakest part of the story. Well, honestly, I think the length of the story was the weakest part. It needed to be longer and I’m not just saying that as someone who never wants these stories to end.

Kira was a human and not familiar with the whole shifter society and her introduction to it was very violent. I didn’t buy her accepting it so quickly, she really fought against it and then abruptly changed her mind. It seemed rushed and not the full story.

I look forward to the next book, I just hope it’s more complete.