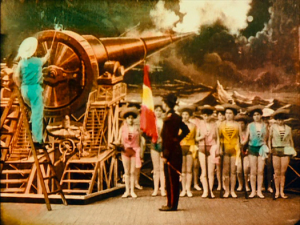 A group of astronomers go on an expedition to the moon.

Spoiler, I’m giving this movie a 5 stars just because of the technological feat that was accomplished. The start of the film says that it was found in horrible condition but they were able to restore most of it. Crazy.

Anyway, not really sure what was going on. It looked like a bunch of wizards/scientists decided to be shot to the moon in a bullet from a large cannon. While there they attacked and killed many of the moon people and then came home unwittingly taking a moon creature with them. Naturally they chained it up and made it dance in a parade.

Wouldn’t it be crazy if someone somehow managed to do that? Shoot themselves out of a large cannon, somehow survive, only to die when they get to the moon and there’s no oxygen.

Anyway, the movie was only fifteen minutes long so really there’s no reason not to watch it.