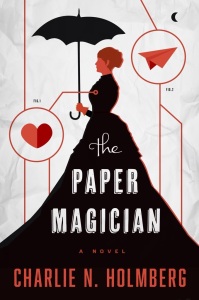 Ceony Twill arrives at the cottage of Magician Emery Thane with a broken heart. Having graduated at the top of her class from the Tagis Praff School for the Magically Inclined, Ceony is assigned an apprenticeship in paper magic despite her dreams of bespelling metal. And once she’s bonded to paper, that will be her only magic…forever.

Yet the spells Ceony learns under the strange yet kind Thane turn out to be more marvelous than she could have ever imagined—animating paper creatures, bringing stories to life via ghostly images, even reading fortunes. But as she discovers these wonders, Ceony also learns of the extraordinary dangers of forbidden magic.

An Excisioner—a practitioner of dark, flesh magic—invades the cottage and rips Thane’s heart from his chest. To save her teacher’s life, Ceony must face the evil magician and embark on an unbelievable adventure that will take her into the chambers of Thane’s still-beating heart—and reveal the very soul of the man.

I love this cover a lot, I’m apparently drawn to simple covers.

Really enjoyed the world that was created here. The way magic worked was interesting. Magicians were tied to one type and once bonded that was it. You could only work magic with manmade materials, so paper, plastic, smelting metals, stuff like that. The thing is man is man made so this creates an Excisioner, which is bad. I don’t understand why they couldn’t have used their magic for good like healing, but they all appear to be evil.

Ceony and Thane were compelling and I was so not expecting what happened in the last act. There was a lot of character and world building in this book, but it never got boring it was too interesting.

I did think Ceony bonded very quickly with Thane, especially after her attitude about the whole being bonded to paper thing. She also seemed to be a planner but didn’t do hardly any of that in her rescue attempt. I guess heat of the moment thing, but still seemed slightly out of character.

I’m really excited that the rest of the series is already written and I get to visit the world immediately.