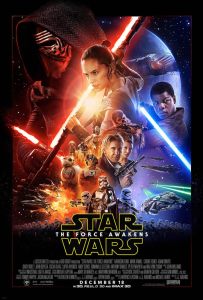 Three decades after the defeat of the Galactic Empire, a new threat arises. The First Order attempts to rule the galaxy and only a ragtag group of heroes can stop them, along with the help of the Resistance.

I waited until I’d seen this movie twice before I sat down to write a review. I worked very hard to keep my expectations low for this movie. Up until the trailers that was really easy to do, still I managed and I think that helped me enjoy it better. I went in with no theories or desires and I enjoyed it. I enjoyed it even more on the second viewing.

I loved the new characters, they were each so awesome that I flip flop between my favorite. I loved the fact that the main lead was a woman, I know I’ve had Leia and Padme in the last movies but it was different this time. I even liked BB-8.

What I didn’t like or really wished they’d spent more work on were the villains. Kylo Ren was a whinny little boy and I really just wanted to smack him, there was none of the fear that Vader evoked. Captain Phasma was barely in the movie which made all her merchandising misleading. Even the bad dude pulling Ren’s strings wasn’t scary. As a whole they were all seriously lacking.

I’m sure some of that will be fixed in the next movie, but I’m getting tired of movies being used to build up their sequels. Marvel is doing that way too much lately and it’s bothering me.

Anyway, this movie did not ruin my childhood and it was not the second coming, but it was a good addition to the series.