Two strangers are drawn to a mysterious pharmaceutical trial that will, they’re assured, with no complications or side-effects whatsoever, solve all of their problems, permanently. Things do not go as planned.

This started out super weird and I wasn’t sure what was real or not. The world was not our own, they had tech we don’t, but it wasn’t magical. It was very odd. As the show progressed I no longer had that issue, even though, they were reality hopping. Things were still weird, but I knew what was happening.

I never warmed up to Jonah Hill’s character. He seemed very devoid of emotion and I had a hard time caring about him at all. Emma Stone, on the other hand, I loved. She wasn’t a very likable character, but I got her emotion and I enjoyed watching her.

I hesitate to say the show was entertaining. I don’t think I enjoyed hardly any of it, but it wasn’t bad. It just ended up not being my cup of tea. 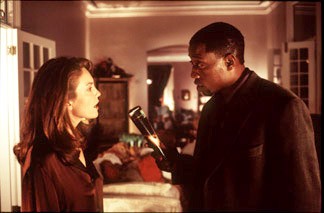 A 25 year old female White House staffer, Carla Town, is murdered in the White House. D.C. homicide detective Regis is assigned to investigate, only to find evidence suppressed by the Secret Service.

This movie did not age well in my opinion. Wesley Snipes was shit on by people and then he in turn shit on Diane Lane. It was obvious who the bad guy was going to be but I refused to believe it was going to be him and went after the red herrings and then it was the person I didn’t want it to be anyway.

This wasn’t an action movie, even with Snipes, so when there was some it was poorly shot. It was definitely a drama.

Basically, someone is murdered in the White House and for some reason the Secret Service or the FBI isn’t tasked with investigating it’s the DC cops. The Secret Service hides information and things are really frustrating because no one should be above the law and then ultimately none of that mattered. It was just a poorly done red herring because it ended up not making any sense with the story.

It was a very eh movie and not one I ever have to watch again. 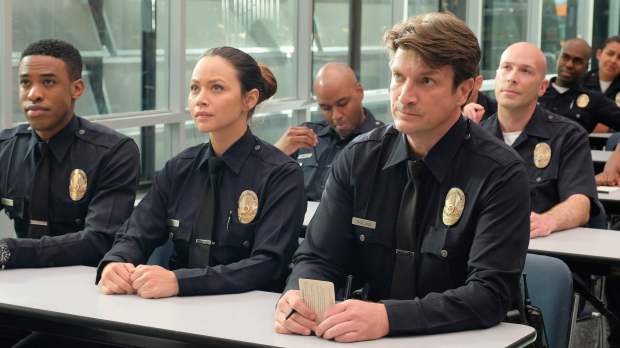 The series follows John Nolan, a forty-year-old man, who moves from his comfortable, small town life to Los Angeles to pursue his dream of being a police officer for the Los Angeles Police Department. He must navigate the dangerous, humorous and unpredictable world of a “young” cop, determined to make his second shot at life count.

I liked Nathan Fillion in Firefly and Castle so I figured I’d give this a shot. He plays a forty year old rookie cop that’s recently divorced and looking to find himself. He is of course wonderful at talking to people because apparently working as a construction worker gives you all kinds of people skills and the ability to read people like a shrink. He is also hooking up with the hot rookie, Melissa O’Neil, that trained with him.

The first episode was pretty cliché. It wasn’t as fun as Castle, but it wasn’t as serious as some other cop shows. It wasn’t as over the top as Hawaii Five 0 or closer to real life like a Law and Order show. It was very middle of the road, in all aspects.

Acting was good. People were attractive but not CW level of ridiculous. It was a cop show with Nathan Fillion. Not sure if I need to watch, though. I might give it one more episode, we’ll see.

After a turbulent, but routine flight, the passengers and crew discover the world has aged five years, yet no time has passed for them, and soon a deeper mystery unfolds.

The premise for this show is really interesting. I also enjoy Josh Dallas, so I decided to give this a try.

The first episode is basically the plot synopsis. It asked a lot of questions and didn’t answer anything. Everyone who was on that plane has had their lives turned upside down and they don’t know the full extent of it yet. Some of them seem to be hearing voices telling them to do things. Lives have moved on and relationships will never be the same.

It’s all interesting and dramatic, but can they deliver on all these questions? No idea. Right now it’s interesting enough to keep me watching, but I am concerned about the religious allusions. Lots of references to a Bible verse and the fact that they’re hearing voices has some wondering if it’s God. Not something I care to watch so I’m really hoping they don’t go that route. If it looks like they are I will be dropping it. 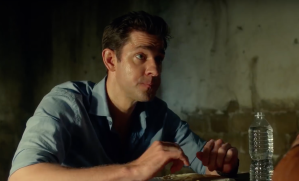 An up-and-coming CIA analyst, Jack Ryan, is thrust into a dangerous field assignment as he uncovers a pattern in terrorist communication that launches him into the center of a dangerous gambit.

When I was younger I really enjoyed the Jack Ryan books by Tom Clancy. It’s been a few years so I’m not sure how those feelings have aged, but I was curious to see this and binged it one weekend.

Jack Ryan, John Krasiniski, is a former marine that after a tragic accident was honorably discharged. He went from a stock broker to working for the CIA as an analyst. He has spotted suspicious financial activity and believes he’s discovered someone about to commit the next 9/11.

The number of times 9/11 was mentioned in the first episode was annoying and had the opposite of the intended effect. I almost stopped there because of it, thankfully, it wasn’t really mentioned again.

I wasn’t impressed with Krasinski’s portrayal of the role. The only time I could tell what he was feeling was when he was smiling, but a show about terrorism meant he was rarely smiling. Every other time I was just guessing, occasionally there would be verbal queues but they didn’t match up with what his face was saying. Mostly he just looked like he was there.

There was one whole plot line with a drone pilot that has caused some controversy because of the transphobic joke that was made. I actually missed the “joke” because I’d been fast forwarding through his sections. They honestly made no sense and could have been completely removed. Maybe his character comes into play later on if there’s another season, but for now it was just wtf.

Female representation was mostly disappointing. Cathy, Abbie Cornish, was the best female main character we had and she was mostly just Jack’s love interest. She did end up getting some of her doctor skills thrown in, but she kind of ruined that by getting mad at Jack for lying about his job. We had a French police captain that was killed. Hanin, Dina Shihabi, was good, but her story line revolved around her escaping her husband and being saved once by the drone operator and then ultimately by Jack. It was a bit disappointing.

James Greer, Wendell Pierce, was probably my favorite character. I loved that they made him a Muslim. He was so incredibly competent at his job and he didn’t automatically share shit with Jack because he was the boss, he didn’t have too. He reminded me of Holdo in The Last Jedi in that regard. He was interesting and a badass and if there’s a second season and they hold with what’s been established in the show and books he’ll be there.

Honestly, based on what I remember of the books, they took a fair amount of creative liberties. That was to be expected, though. Jack Ryan is more about connecting the dots and not action. Occasionally action, but normally it’s a lot of discovering information and sending someone else out into the field. To make a TV show watchable and not boring they had to add more, but it would have been cool if they’d added John Clark and Domingo Chavez.

I’ll probably watch a second season, but I hope they make some tweaks.