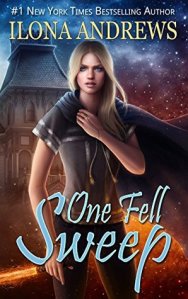 Dina DeMille may run the nicest Bed and Breakfast in Red Deer, Texas, but she caters to a very particular kind of guest… the kind that no one on Earth is supposed to know about. Guests like a former intergalactic tyrant with an impressive bounty on her head, the Lord Marshal of a powerful vampire clan, and a displaced-and-superhot werewolf; so don’t stand too close, or you may be collateral damage.

But what passes for Dina’s normal life is about to be thrown into chaos. First, she must rescue her long-distant older sister, Maud, who’s been exiled with her family to a planet that functions as the most lawless penal colony since Botany Bay. Then she agrees to help a guest whose last chance at saving his civilization could bring death and disaster to all Dina holds dear. Now Gertrude Hunt is under siege by a clan of assassins. To keep her guests safe and to find her missing parents, Dina will risk everything, even if she has to pay the ultimate price. Though Sean may have something to say about that!

The Innkeeper Chronicles is posted piece by piece on Ilona Andrew’s blog and this was the first one I read that way. It’s probably the last too if I can resist. I love Andrews books and I really love this series, however reading a book that slowly piece by piece is excruciating and I’m not sure if I could handle it again.

Thankfully once the books are complete they release them on kindle and anyone not able to take the blog route can just buy it and enjoy it like normal. Once I could I pre-ordered and with my Christmas vacation time I read this like a normal Ilona Andrews book, meaning I stayed up until almost four in the morning and I’m eternally thankful that my husband was home that week and I didn’t have to wake up with our daughter.

In book form the story has been edited and little things were added, not really enough to make someone who read on the blog feel cheated, but enough to tighten up the story and make it feel more polished. I don’t completely remember the ending on the blog, but the ending in the book really set up the next and it’s going to be difficult (impossible) for me not to read it online again.

I love Dina and the person she is. She’s nice and caring and even though she’s surrounded by excellent fighters she still brings a lot to the table in a battle situation. Sean is a wounded soul that you just want to cuddle and he hasn’t fallen into the much used trope of feeling he’s unworthy of love. There was a lot of character development for both of them and we got to meet more family which was awesome.

This is really such an awesome treat of a series and I feel so blessed that Andrews keeps writing more.