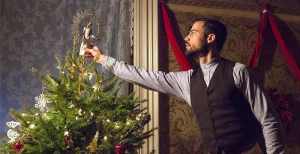 Kate, a workaholic lawyer, has three weeks to get a haunted bed and breakfast appraised and sold. The uncooperative manager claims a spirit who lives there will not approve.

So this movie is about a hipster ghost. I actually really liked it, oddly enough. I love all the supernatural stuff in Christmas movies and this one really embraced it. There was very little time spent on proving he was what he said he was and they jumped right into trying to get him to move on.

The romance was sweet, though, a bit weird, because he was a ghost. He also was in love with a woman before he died and part of why he was still around was because of her. I realize that was a few decades ago but he pointed out a few times it was still fresh for him.

The ending left me with some questions, but overall I really liked it and I hope to find more like this one.