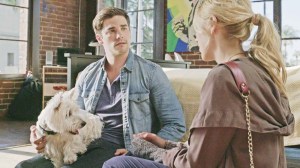 A woman engaged to marry a self-centered film and stage director/choreographer falls for a caterer whom she kisses, as does he for her.

This movie was like a reverse Christmas movie because instead of following the “good” people it followed the bad, only it tried to make them out to be good. They weren’t evil or anything, but the argument could be made that they weren’t good.

Basically, the girl is engaged and is also the personal manager to her fiancé, who happens to freaking love Christmas, but the “spark” in their relationship is gone. He actually expects her to work and isn’t constantly doting on her. He’s trying to put on a production of the Nutcracker, he’s busy, he can’t go shopping and walk around looking at stuff. Sure he could have been a bit more attentive, but if he was when he wasn’t in a time crunch surely you could expect things to get better once the time crunch was over. Instead she ends up accosting this poor man in an elevator, she’s trying to escape some woman that she had been talking to and just bailed on in the middle of a conversation, so naturally that means kissing the first man she comes into contact with, didn’t even ask first. She ends up kissing him twice, then heads back to her fiancé.

More stuff happens, she ends up breaking things off with her fiancé because he acts jealous, when he had every reason to be. Her fiancé has an opportunity to cheat and doesn’t, he tries to patch things up, but by that point she’s moved on to the elevator dude.

Honestly, if this had been a true reverse Christmas movie and didn’t try to act like the leads were the good guys then I might have liked it more.