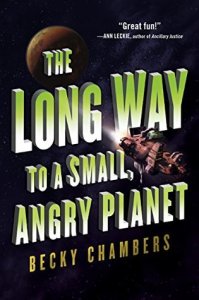 The Long Way to a Small, Angry Planet (Wayfarers #1) By: Becky Chambers

A rollicking space adventure with a lot of heart

When Rosemary Harper joins the crew of the Wayfarer, she isn’t expecting much. The patched-up ship has seen better days, but it offers her everything she could possibly want: a spot to call home, a chance to explore the far-off corners of the galaxy, and some distance from her past.

And nothing could be further from what she’s known than the crew of the Wayfarer.

From Sissix, the exotic reptilian pilot, to Kizzy and Jenks, the chatty engineers who keep the ship running, to the noble captain Ashby, life aboard is chaotic and crazy—exactly what Rosemary wants. That is until the crew is offered the job of a lifetime tunneling wormholes through space to a distant planet. Sure, they’ll earn enough money to live comfortably for years, but risking her life wasn’t part of the job description.

The journey through the galaxy is full of excitement, adventure, and mishaps for the Wayfarer team. And along the way, Rosemary comes to realize that a crew is a family, and that family isn’t necessarily the worst thing in the universe… as long as you actually like them.

This was a nice change of pace, the universe was no more negative or positive than our own, which was nice. It painted a future that wasn’t dystopian that I enjoyed. There was a ton of detail put into the different races, the worlds, and the tech. It was very impressive, though, at times a bit more than I cared to know.

One of the things I appreciated was the diversity of the races and their cultures and norms. We met several difference races since the ship was multispecies and the differences and the attention to detail Chambers goes into was interesting.

The story was a bit lacking. Most of the book was details about tech and the different species and cultures within the universe and on the ship. We did have some character development but it followed the entire crew so it was spread thin. While I appreciated the details, there could have been a bit less and a bit more to the story. Basically the crew traveled from one place to another with little stops during that time and only a couple off minor incidents until the end.

I liked the characters and I would be interested in reading more, but the pacing was a bit slow so I’m hoping that future installments have a bit more happening or something more.