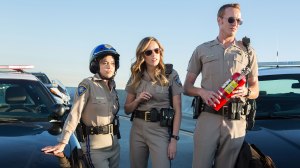 A rookie officer is teamed with a hardened pro at the California Highway Patrol, though the newbie soon learns his partner is really an undercover Fed investigating a heist that may involve some crooked cops.

This movie was a lot funnier than I expected. It’s actually kind of sad that it bombed and won’t get a sequel.

Dax Shephard is an ex-BMX rider or something and is basically stitched together. Michael Pena is an FBI agent that can’t resist yoga pants and is a loose cannon. They become friends and catch bank robbers. It’s hilarious. Also, boobs.