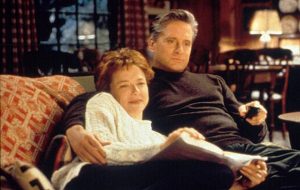 Comedy-drama about a widowed U.S. President and a lobbyist who fall in love. It’s all above-board, but “politics is perception”, and sparks fly anyway.

The world was a different place when this was written. Kind of. I mean, yeah, the environment and guns were still a huge issues, but we actually thought they could be solved. We were innocent.

In the past I’ve liked this movie. It’s from Aaron Sorkin, so it definitely idealizes the American government but it’s also much more believable than the movie Dave. Now, though, it’s depressing to watch. It’s really impossible to watch and ignore the politics of everything and just take it as a romance. He’s the president, she’s a lobbyist. The politics are enmeshed in everything.

Maybe in another time I’ll be able to watch this again and enjoy it. I really hope so, I used to love re-watching West Wing. My heart just can’t handle it right now.