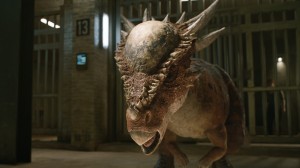 When the island’s dormant volcano begins roaring to life, Owen and Claire mount a campaign to rescue the remaining dinosaurs from this extinction-level event.

Fallen Kingdom started off strong. Immediate dinosaur action, then some story explaining that Bryce Dallas Howard had changed from a corporate exec to a bleeding heart, dinosaur loving, activist. Meanwhile, Chris Pratt is building a cabin in the middle of nowhere.

Then back to the dinosaur action. Throw in some exploding volcano and the first half of this movie is just perfect. It hits all the notes you want from a Jurassic Park movie, though, my husband was a bit peeved that the T-Rex was once again a hero.

Things started to slow down for the last third. Well, not really slow down, but I just didn’t care much about it. I didn’t like the introduction of the clone child. It could have been fine, but she was just sort of there in the background and then BOOM saving them. It was eh.

That last third just felt weaker and I can’t really put my finger on why. I didn’t like the kid, but I thought the cloning side of things was interesting, but it kind of expands past what I want from a Jurassic Park movie. Money as a motive was normal, but I didn’t like how easily Bryce was drawn in by the bad guy. She was so smart and capable in the previous movie and she was conned so easily. She didn’t question at all. She was still a badass, though, so I liked that. Chris Pratt helped the IT dude because he knew she could take care of herself.

I love Blue, but the whole Chris Pratt blue backstory was kind of eh. I like seeing a softer side, but it just seemed kind of odd. I feel like they tried to change the characters or make them deeper and not everything worked for me because it went against what I’d already built in my head. Bryce Dallas Howard is a badass corporate chick, while Chris Pratt is an animal trainer that can run.

Great movie. Beautifully shot, felt very much like a Stephen Spielberg movie, so kudos to J.A. Bayona. Music was spot on too. Looking forward to the next.