He’s in trouble with a capital T…

There’s never been a female on the Dallas SWAT team and Senior Corporal Xander Riggs prefers it that way. The elite pack of alpha male wolfshifters is no place for a woman. But Khaki Blake is no ordinary woman.

When Khaki walks through the door attractive as hell and smelling like heaven, Xander doesn’t know what the heck to do. Worse, she’s put under his command and Xander’s protective instincts go on high alert. When things start heating up both on and off the clock, it’s almost impossible to keep their heads in the game and their hands off each other…

I loved Wolf Trouble. Soooo much. I flew through this book and had such a hard time putting it down when life called me away. I liked the last book, but this one was so much better.

Khaki, the heroine, was a werewolf and a police officer. She was also dealing with a crazy ex-boyfriend that was doing his best to get her killed on the job. She was smart and strong. She was able to hang with the dudes but not lose her femininity. She balanced a very careful line perfectly. Least favorite part was her name.

Xander was an alpha male, like all the others, but he recognized that Khaki was also an alpha. He didn’t dominate her at all. If anyone was dominant in the relationship, it was Khaki. He fought his attraction because he didn’t understand it, but he never stood a chance the way things work in this universe.

As a couple, they worked out perfectly because of how soulmates work. It didn’t even bother me that he was her superior officer. There was never any question that they were both attracted to each other.

The action was great. I loved the crazy ex storyline. The team dynamic was a lot of fun. I’m so glad I already have the next book in the series and can’t wait to read it.

For the cases no one else can solve, they send in the Special Threat Assessment Team

Supernatural creatures are no longer keeping their existence secret from humans, causing panic around the globe. To investigate, monitor, and ― when necessary ― take down dangerous supernatural offenders, an international task force was established: The Special Threat Assessment Team.

STAT agent Jestina Ridley is in London with her team investigating a suspicious kidnapping. Over her radio, Jes hears her teammates being savagely attacked. She runs to help, but she’s too late. The only survivor, Jes calls for backup and gets former Navy SEAL and alpha werewolf Jake Huang and his new pack. Convinced that the creature who butchered her teammates was a werewolf, Jes doesn’t trust them. But if they’re going to uncover the facts and make it back home alive, she’ll need Jake’s help. And with everything on the line, Jes will have to accept Jake for who he is, or lose the partner she never expected to find.

Wolf Under Fire was a romantic action story. Since a woman wrote it, the romance was actually good. There were soulmates, instant attraction, and everyone was drawn to their significant others scents.

Jake was ex-military and an ex-cop. He’d just signed up to lead a team at the FBI that specialized in the supernatural. I got the distinct feeling I was missing out on parts of his history, so I believe he was talked about in another book, but it didn’t impact the story.

Jes was a seasoned agent for STAT and not the biggest fan of werewolves. When she meets Jake, there’s an instant attraction, but their first meeting isn’t the best. Things quickly escalate, though.

Most of this book was action. There were car chases, explosions, and lots of fighting. As I said, it was an action romance. This isn’t my usual genre, but I enjoyed it. I do wish there was more information about the supernatural, but Jake and Jes both seemed to be very ignorant about the world. I was also able to guess a couple of the twists pretty quickly. All in all, it was enjoyable, and I see myself reading more from Tyler.

Bruce Banner, a scientist on the run from the U.S. Government, must find a cure for the monster he turns into, whenever he loses his temper.

The second movie in the Marvel Cinematic Universe is incredibly different from the first. I understand why they made The Incredible Hulk, of the original Avengers movies The Hulk, probably, had the most name recognition. However, I think this movie took too much inspiration from the Ang Lee Hulk film.

Norton plays a more broody and dark version of Bruce Banner than Mark Ruffalo. His focus is on keeping his heart rate down because that is what he believes sets him off. His entire existence is finding a cure so that he can get rid of The Hulk and is living in Brazil working in a bottling company while he talks on an encrypted channel to Mr. Blue, Tim Blake Nelson. Eventually he has to come to NY, because everything always happens there, so that he can finally be cured.

During all of this you discover that General Ross, William Hurt, has been trying to find him so that he can recreate The Hulk. He’s desperate for that ability and ends up giving power to someone who is clearly too attracted to violence.

This movie isn’t shot like what I’ve come to expect from superhero movies. It is much more of an action thriller and has probably the best shot action scenes in the entire MCU. There’s no shaky cam and very few quick cuts, even with the large amounts of CG that was used. It was impressive.

Story wise, the movie only makes a passing reference to S.H.I.E.L.D. and doesn’t mention Iron Man at all until the credits scene (which is not at the end) when Tony appears. Bruce believes he changes because of his heartrate and not just because of rage, which I don’t believe is brought up again. Betty, Liv Tyler, makes no future appearances even though they act like she’s the love of his life. Blonsky, Tim Roth, is captured, but not killed, and Mr. Blue is exposed to Bruce’s blood and starts to change. To my memory none of this is referenced in further movies.

The Incredible Hulk is like the relative that people prefer not to talk about at family reunions. It seems to be largely ignored in the greater story and, thankfully, is not used as a style inspiration for future movies. Though, maybe Thor: Dark World could be explained that way…

Clearly, you don’t have to watch The Incredible Hulk to enjoy the MCU, but it is interesting to see what could have been. What if, instead of bombing financially, making less than half what Iron Man did, the roles had been reversed? How would that have changed the franchises future? 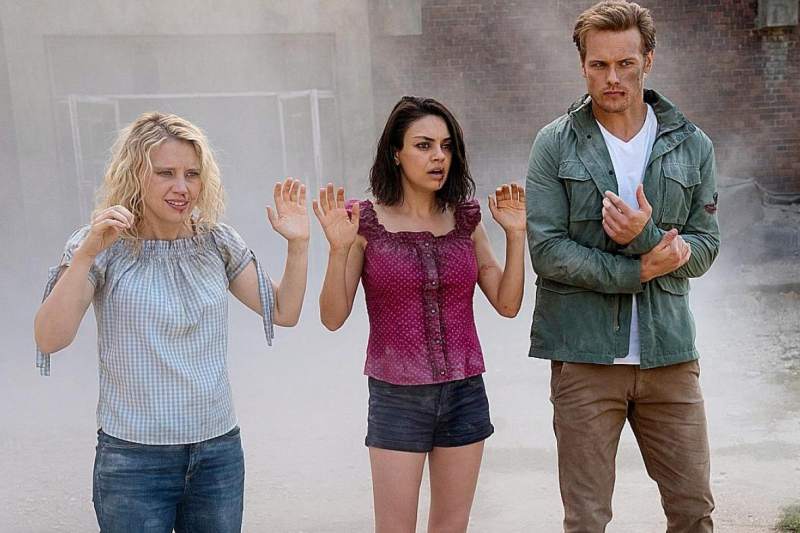 Audrey and Morgan are best friends who unwittingly become entangled in an international conspiracy when one of the women discovers the boyfriend who dumped her was actually a spy.

Audrey, Mila Kunis, is dumped by a d-bag that turns out to be a spy, Justin Theroux. She is then pulled into a plot that involves traveling all over Europe, surviving multiple gun fights, and attempts on her life. The movie is incredibly amusing and fun to watch, I love how competent the friends are, but they also make obvious newbie mistakes, and hijinks ensue.

The real revelation for me was Sam Heughan. I’ve never had a desire to watch Outlander until now, but damn that man can walk down a hallway. The scene where he’s going in to save the women…if my husband hadn’t been sitting right beside me I would have rewound that scene a few times. I actually searched for a gif of it but couldn’t find it. So sad.

The movie was definitely entertaining and has been added to the list of movies I’ll buy when I see it on sale. I could see myself watching it just to have something fun on in the background.

A security expert must infiltrate a burning skyscraper, 225 stories above ground, when his family are trapped inside by criminals.

Die Hard on a skyscraper. This was a fun, stupid movie that didn’t always make sense but was entertaining to watch.

Dwayne Johnson was great. I loved that his character was missing a leg. He was smart, a dedicated father and husband, and just an all-around good guy who was friends with the wrong people and in the wrong place at the wrong time.

The movie was over the top and ridiculous and just enjoyable to watch. There was nothing deep here. It was completely unbelievable, but that didn’t matter. It was easy to turn my brain off and just watch.

I liked that the wife, Neve Campbell, wasn’t helpless and that she had her own part to play in things. It would have been easy to make a damsel in distress or too much of a badass and they didn’t. I appreciated that a lot.