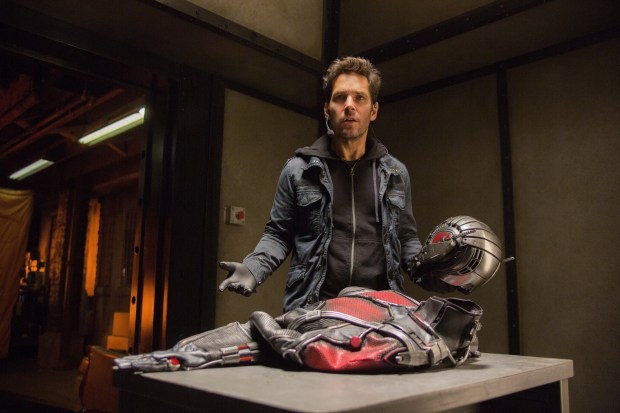 Armed with a super-suit with the astonishing ability to shrink in scale but increase in strength, cat burglar Scott Lang must embrace his inner hero and help his mentor, Dr. Hank Pym, plan and pull off a heist that will save the world.

Scott Lang, Paul Rudd, is a real life Robin Hood. He stole from a rich ISP and gave the money back to the consumers. He is the hero we deserve. Sadly, much like the real world, he was put in jail and is only now getting out. Optimistic that he’ll be able to find a new job fast, he’s shocked to learn that even as a really smart white man being an ex-convict closes a lot of doors, especially the Baskin Robins door. Broke and desperate to see his daughter he returns to a life of crime.

In perhaps one of the most realistic parts of the Marvel Cinematic Universe Dr. Hank Pym, Michael Douglas, is yet another white man with a galactic size ego. He picks Scott out to carry on the mantel of Ant-Man, though, conveniently leaves out the damage the suit has done to him that makes it so he’s unable to continue using it. He also is adamant that the Avengers not be contacted even though the world is in danger.

Alright, we’re like eleven movies into this re-watch and it’s clearly starting to get to me. I love the movies, I really do, but watching them back to back like this is really, really, highlighting their flaws. Namely, the fact that almost everyone is a freaking white man; they’ve got their little things that make them different from each other, but still… Also, most of the female characters are bad asses with a large portion of them having a tragic past.

Wasp, badass with a tragic past, mother died and her father was a dick.

Black Widow, badass with a tragic past, raised to be an assassin from a very young age.

Scarlett Witch, badass with a tragic past, though, personally badass is kind of a stretch her powers are impressive.

Pepper Potts, rich secretary who is briefly a badass, past unknown.

Betty Ross, scientist, not a badass, father’s a dick, only in the universe one movie before never really brought up again.

Lady Sif, badass, past unknown, disappears after two movies is in a couple episodes of SHIELD.

Gamora, badass with a tragic backstory.

Nebula, badass with a tragic backstory.

Valkyrie, badass with a tragic backstory.

It’s not until we get to Black Panther that we get a character that’s a bit more with Shuri and she’s been in two movies so far, so hopefully she’s not disappeared. Also, I could be forgetting someone and I didn’t include Captain Marvel because she’s got her own movie, and I don’t consider her backstory tragic, it’s a pretty normal backstory for a woman of her age.

It’s just…it’s really obvious and it really shows how much the series has changed, but I hope it continues to grow. I want more. They’re superhero movies so every main character or supporting character is going to be some level of badass, for the most part, but I want some diversity in their backgrounds. I’d like them to not just be forgotten or never mentioned again. I love the universe, I hope it continues to do better, and be like the heroes they’re telling stories about.

Here is my original review of Ant-Man, after further consideration I think I’ll actually bump it up rating wise. Ant-Man is a good character, but the movie is fun because of Michael Peña.