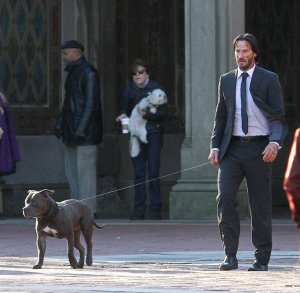 After returning to the criminal underworld to repay a debt, John Wick discovers that a large bounty has been put on his life.

I did not get to see this in theaters, sadly, I think it actually bothered my husband more than me, but what can you do. Newborns.

Anyway, knowing that it was highly unlikely we wouldn’t like this we ordered the steelbook from Best Buy and watched it the day it came out. We were not disappointed.

So many good fight scenes, and it was all shot so well, no stupid shaky cam or over usage of quick cuts. I loved the world expansion and all that we learned, it’s so interesting. Sure it’s romanticizing assassins, but it’s just so damn cool.

Something I really enjoyed was the fact that this told a complete story, but it also set up for the sequel. The point of this movie though wasn’t the sequel, I’m looking at you Avengers Age of Ultron. The way it was done made me want to know more about the characters and the world, but didn’t leave me without a conclusion to the current conflict.

Loved this movie, though, I’ll need to watch it another time before I decide if it was better than the first.