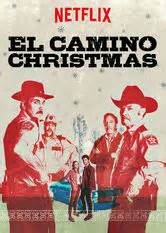 The project, scripted by Melfi and writer Chris Wehner, is about a young man (Grimes) who seeks out a father he has never met and, through no fault of his own, ends up barricaded in a liquor store with five other people on Christmas Eve. The story takes place in the fictitious town of El Camino, NV.

Giant cluster fuck the movie. Everything that can go wrong basically does but it’s not funny in the slightest. So if that’s what you want this holiday season, a shootout in a gas station liquor store, involving incompetent cops, and a whole lot of booze then this is the movie for you.

Tim Allen seemed to be phoning it in, though everyone else was pretty good. Vincent D’Onofrio did a bit of overacting, well maybe not, his character was a fucking asshole and a drunk so who knows. Ending was not very satisfying, though, I appreciated the epilogue. It was not a happy Christmas movie.