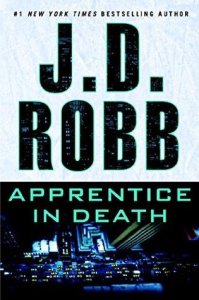 Lieutenant Eve Dallas must hunt down the deadly snipers terrorizing Manhattan in this fast-paced In Death thriller from J. D. Robb.

The shots came quickly, silently, and with deadly accuracy. Within seconds, three people were dead at Central Park’s ice-skating rink. The victims: a talented young skater, a doctor, and a teacher. As random as random can be.

Eve Dallas has seen a lot of killers during her time with the NYPSD but never one like this. A review of the security videos reveals that the victims were killed with a tactical laser rifle fired by a sniper, who could have been miles away when the trigger was pulled. And though the list of locations where the shooter could have set up seems endless, the number of people with that particular skill set is finite: police, military, professional killer.

Eve’s husband, Roarke, has unlimited resources—and genius—at his disposal. And when his computer program leads Eve to the location of the sniper, she learns a shocking fact: There were two—one older, one younger. Someone is being trained by an expert in the science of killing, and they have an agenda. Central Park was just a warm-up. And as another sniper attack shakes the city to its core, Eve realizes that though we’re all shaped by the people around us, there are those who are just born evil…

I was dead tired after I finished reading this. The entire thing took place over about a seventy-two hour period it felt like and Eve was just constantly moving. From about 35% it was edge of your seat, very rarely let up.

Eve is just living her life, dreading going to Mavis’ daughter’s first birthday, when she’s called in for a shooting. She realizes quickly that it’s a long distance serial killer. Things just go from there.

Roarke was with her on this one, and we saw a ton of other people, but for the most part this was Eve all the way. Even Peabody wasn’t very present in this one. She was always off doing other things. She was there, but her personal life wasn’t talked about at all. I missed that, along with the other side characters, but with such a tight time frame I understand why it wasn’t possible.

The killers were…well one was pathetic and one was evil. The evil one was interesting and a bit scary. Eve zeroed in on them fairly quickly and she was better about not projecting on them as much as she has in the past.

One of the things I love about this series is that there does appear to be growth of the characters. They move on, they learn. It’s wonderful.