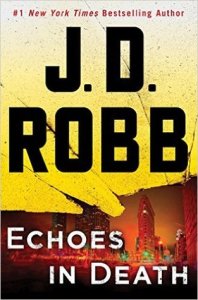 After a party in New York, Lieutenant Eve Dallas rides home with her billionaire husband, Roarke, happy to be done with cocktails and small talk.

After another party, not far away, a woman retires to her bedroom with her husband—and walks into a brutal nightmare.

Their paths are about to collide…

When the young woman—dazed, naked, and bloody—wanders in front of their car, Roarke slams on the brakes just in time, and Eve, still in glittering gown and heels, springs into action. It’s been a long night for the tired homicide cop, and it’s far from over.

Daphne Strazza is rushed to the ER, but it’s too late for Dr. Anthony Strazza. A brilliant orthopedic surgeon, he now lies dead amid the wreckage of his obsessively organized town house, his three safes opened and emptied. Daphne would be a valuable witness, but in her terror and shock the only description of the perp she can offer is repeatedly calling him “the devil” . . .

While it emerges that Dr. Strazza was cold, controlling, and widely disliked—and that he treated Daphne like a trophy wife—this is one case where the evidence doesn’t point to the spouse as the first suspect. So Eve and her team must get started on the legwork, interviewing everyone from dinner-party guests to professional colleagues to caterers, in a desperate race to answer some crucial questions:

What does the devil look like? And where will he show up next?

It is now Feb 2060, Eve and Roarke are on their way home from a gala when they almost hit a naked woman running through the snow. They rush her to the hospital where it’s discovered that she’s been tortured and raped by, in her words, the devil. Eve reports the attack then goes to the victims house where she discovers the body of the victims husband.

The mystery was not as non-stop as the previous book, which I appreciate, but there were enough twists to make it entertaining. I was able to guess who done it fairly easy, but it was still satisfying when they were caught.

We had more Peabody in this book, but not as much as I would have liked. The books have become more Eve centric than I remember. Sometimes it feels like Peabody is just her secretary, thankfully, she did make a couple contributions to the story, but not many. It has me wondering if she will find a new partner soon, which is kind of sad.

All in all, it was a fine book and nice addition to the series, but I’m hoping for more of a contribution from side characters soon.