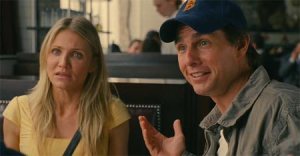 A young woman gets mixed up with a disgraced spy who is trying to clear his name.

I’ve watched this movie twice and I still don’t know if the characters are crazy. If they are then I think the movie is asking the question, is crazy something you can catch.

Tom Cruise is a spy that uses Cameron Diaz to get past airport security. She ends up getting pulled into his crazy life and eventually catching the crazy. Or maybe he just brings what was already there to the forefront, not sure.

In all fairness, she tries to escape multiple times, but he repeatedly drugs her and she eventually just accepts her fate. Then decides if you can’t beat them best join them so she starts pulling her own crazy shit.

Honestly, the movie is odd because of how Tom Cruise decided to play the character. Maybe he was trying to make it very different from Mission Impossible but still remain a badass, I’m not sure. He was just odd and Diaz just went from there.