Delicious Emily: Message in a Bottle

Enjoy an amazing story while you cook divine dishes in Italian kitchens!

The story in this started out pretty dark. Delicious Emily: Hopes and Fears ended with a donkey and postman showing up saying that he had a letter. Well DE: Message in a Bottle opens thirty years ago when Emily was three and she was spending time with her grandfather. Her grandmother has recently passed away and he’s depressed. The first five levels are pretty fast but end with the grandfather giving a three year old a goodbye letter and sailing off into a horrible storm. I got definite suicidal undertones and was really surprised at the dark tone. Eventually, meaning at the very end after the main story ended, you discover that wasn’t his intention, he was just storming off like a child and sulked for thirty years.

In this story we get to see more of Emily’s father’s family. They aren’t very pleasant, even after they learn their lessons. They bring stubborn to a whole new level, which I can easily understand, but isn’t very sympathetic. They also seem to bring out the worst in Emily’s dad.

All and all, story wise, I enjoyed this much more than DE: Hopes and Fears.

Game play things were slightly changed. You did not have a diamond to get on every level, which made this game easier than the rest. I did feel like you had to work harder to unlock things, though, and so I still had nineteen hours in to beat and unlock all achievements. Thankfully, I kept track of all the items and I don’t have to replay the game to get the final achievement like I’ll have to do with Hopes and Fears.

Message in a Bottle was a nice installment to the series, it expanded the family and history, though, Emily was not a very big part of the story. It set up some potential conflict for the next installment, so we’ll see what happens and if the rest of the family ever shows up again. 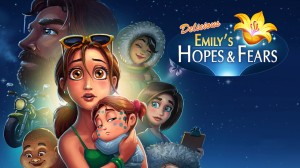 When Paige succumbs to a mysterious illness, Patrick embarks in search of a cure. Join Emily and Patrick in the twelfth installment of the Delicious franchise as they face Emily’s Hopes & Fears.

The game starts off with Emily and Patrick having some issues with being parents. Well, mainly Patrick wanting to work on his motorcycle and do his thing but Emily wanting him to be more hands on with Paige. Patrick is all whiny and annoying and honestly bothered me through the whole game.

Once Paige gets sick instead of sticking around to be with his daughter in the hospital he decides that a special flower his grandfather wrote about will cure her and so he freaking leaves. Wtf?!? Emily had a couple moments where she was angry at him but she was entirely too forgiving for his fucked up behavior.

Of course he finds the flower and it ends up curing her, which bothered me even more. Modern medicine failed and a magical flower cured all while at the same time a father got to bail and go on a “heroes” journey. I think considerably less of Patrick after this game.

I was able to beat it in about 17 hours then spent 3 hours trying to get all the achievements. I’m still lacking two because I can’t find the one freaking item that I have not sold to someone and I’m going to have to create a spreadsheet and checklist to get it. I’m not in a rush to do that, though.

Style and gameplay are the same as previous games. There are 65 levels and 3 stars for each level. You’ve got side quests and mice to catch. It was fun, but I wasn’t a fan of the story.

Discover Delicious – Emily’s Home Sweet Home and help the O’Malley’s fix up their dream house! After a warm welcome, some neighbors reveal a different nature. A turbulent time follows in which Emily and Patrick must go above and beyond to not have their house condemned. A house is a house, but can you help them make it home?

When I got my first kindle fire I ended up having some app credits, I can’t remember what drew me to the Delecious Emily games, probably getting to cook stuff and the similiarty to Facebook games I use to like, but I ended up really enjoying them. Recently I realized that they are showing up on Steam now so during a sale I picked up a couple. I haven’t done many game reviews, but I thought I might as well.

Home Sweet Home is the eleventh installment in the series. You do not need to have played the other games to enjoy this, even though it is a continuation of the story and characters. Emily and Patrick have Paige and have just bought their dream house and are fixing it up. They have to overcome obstiacals as they go, but you’re not missing anything if you are just jumping in now.

There are about 60 levels I want to say, each one has an objective, 3 stars, and a mouse to find. There are also side quests that are just an extreme objective for you to complete. The game is all about time management and organization, so I find it fun. You unlock new items, have to purchase upgrades, and I like the cute art style.

Honestly, they aren’t complicated games, but I find them relaxing and fun to play. It makes me happy that the series has been going on so long and I hope it continues.