When the puppet cast of a ’90s children’s TV show begin to get murdered one by one, a disgraced LAPD detective-turned-private eye puppet takes on the case.

This is a dirty, filthy movie. If you want to see puppets do stuff you’d never see on Sesame Street than feast your eyes.

The Happytime Murders is a noir film with puppets. Phil, Bill Barretta, is a disgraced cop turned PI. He was the first puppet to ever become a police officer and he botched it because he missed a shot and accidently killed another puppet. The movie opens with him going into his office and discovering a curvaceous broad with a sob story. It hits all the usual noir tropes, with the addition of puppets and their weird quirks.

It was at times funny and entertaining, but mainly because you were seeing puppets in weird places. The story wasn’t original and wouldn’t have been worth watching without the puppets. It was just, kind of, weird. 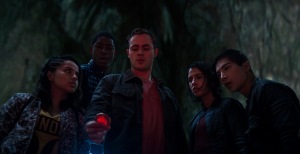 A group of high-school students, who are infused with unique superpowers, harness their abilities in order to save the world.

This movie really benefited from me recently watching some episodes of the original series as well as some episodes from one of the newest series. I didn’t have the show completely covered in nostalgia so I was more receptive to it.

Power Rangers are teenagers that are given devices that allow them to morph into armor that puts them on the same strength level as galactic monsters bent on destroying them and the universe. Why you would give teenagers that power, who knows? But there you have it.

I appreciated that they weren’t racist like the original series was with color choices. I liked that the yellow ranger was unsure of her sexuality. I liked that the blue ranger was autistic, at least I believe he was. Red ranger was eh, but he’s never been my favorite. Pink ranger was a mean girl that was redeemed because she’s hot? I’m really not sure about her and hope there’s more to her story. Hopefully, the next movie introduces a hot green ranger.

I hate teenage angst, but it’s very much part of the Power Rangers formula so it wasn’t out of place in this movie. The only thing that I really thought they could have done better with was the action scenes and the revelation of the Megazord. Power Rangers is great when it comes to action and this movie was seriously lacking. Two car crashes, but you could barely see them kicking butt.

I’m interested in what the next movie will be like and hope they’re able to improve on this one, but keep in the same vein on everything else.

After a humiliating command performance at The Kennedy Center, the Barden Bellas enter an international competition that no American group has ever won in order to regain their status and right to perform.

I watched the first movie, I know I did, but apparently it was before the website. I vaguely remember liking it and that’s probably how I’m going to remember this one as well.

It was cute. It seemed to have some pacing issues where it was too slow at a couple parts and then sped through others. It’s a lot of people to follow so it’s going to move fast.

Favorite part was the underground acapella competition. Was not expecting to see all those comedians and the Packers, it was a strange combo, and hilarious.

I don’t really think this series needs any more movies, but it looks like they’re making another sequel, so we’ll see what happens. 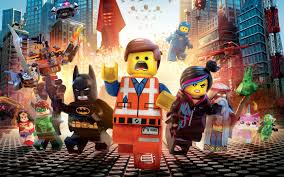 An ordinary Lego construction worker, thought to be the prophesied ‘Special’, is recruited to join a quest to stop an evil tyrant from gluing the Lego universe into eternal stasis.

Loved how this movie looked. Just loved it. Brought back so many memories and the detail was great. There were thumb prints on the shiny parts, teeth marks, and normal wear and tear from everyday use. The details were a subtle clue that more was going on and I liked that. I liked that we weren’t hit over the head with innuendo that there was more than meets the eye. It just sort of happened and didn’t take away from the animated parts.

The story wasn’t quiet as awesome as the look but it was still enjoyable, just a bit predictable. It’s a kids movie though so it gets a pass.