Supervillains Harley Quinn, Bloodsport, Peacemaker and a collection of nutty cons at Belle Reve prison join the super-secret, super-shady Task Force X as they are dropped off at the remote, enemy-infused island of Corto Maltese.

At this point, I’m not sure if DC deserves to have their movies reviewed. Unless I’m angry at them.

This is the second Suicide Squad movie and it has nothing to do with the previous one, only it does? This one has a ‘the’ in the title, which is the only different thing. This one is a much better story, but personally, I think the music in the previous one was better. That was the only good thing about the first one, though.

The Suicide Squad was the best DC movie hands down, but the bar was really low. It’s also the best movie to come out in 2021, but again, the bar was low. It was not, however, James Gunn’s best. Still, if he’s at the helm for the first time in a long, long time I have some hope in DCs future offerings.

The Guardians struggle to keep together as a team while dealing with their personal family issues, notably Star-Lord’s encounter with his father the ambitious celestial being Ego.

We find the Guardians of the Galaxy fighting a giant alien as hired mercenaries for a race of snooty gold people. Rocket, Bradley Cooper, steals something he shouldn’t because he’s seemingly testing the boundaries and strength of his new relationships. Things don’t go well for the Guardians, but it’s okay Star Lord’s, Chris Pratt, father shows up and saves the day.

Yeah, so apparently Star Lord’s father, Kurt Russell, is an immortal planet, or something. He has spread his seed far and wide in the hopes of creating a prodigy that can help him destroy the universe, well create it in his own image.

Each of his children have failed, but when he learns Star Lord has held an infinity stone and lived he has hope. Unfortunately for him, being a being alive for millennia, he doesn’t understand that killing your child’s loving mother is like the worst thing you can do.

This movie was about Star Lord and Rocket’s stories. There were some dashes of Gamora, Zoe Saldana, and Nebula, Karen Gillan, they started to work out their issues, but probably not. We also got little doses of the odd relationship between Drax, Dave Bautista, and Mantis, Pom Klementieff. For the most part, though, it was Star Lord. We saw more of his backstory, more of his family, and the ending was mostly about him as well. The movie is called Guardians of the Galaxy, it would have been nice if it had more of an ensemble feel, like Avengers. Star Lord had 11 more minutes of screen time than the next person, which doesn’t sound like a lot, but even when he was not on the screen a fair amount of the story revolved around him.

Part of why I enjoyed the first movie was the other characters and by far my favorite parts of this movie had almost nothing to do with Star Lord. Basically, anything with Groot and Rocket was awesome. I really liked Gamora and Nebula working on their shit too. The weakest part of the story, in my opinion, was Star Lord’s.

Overall, I’m not sure what impact this movie had on the greater Marvel Cinematic Universe. We now have Mantis, who plays her part with trying to distract Thanos in Infinity War. There are some allusions to a future Guardians plot, but no idea if that will impact anyone else.

The movie was a step down from the original. Oddly enough, I loved it on my first viewing. So what’s changed? Is it because I watched it so closely to the first? Is it because this is the first time I’ve watched it since Black Panther, Thor Ragnarok, and Captain Marvel? I don’t know. I still enjoyed the humor at least.

A group of intergalactic criminals must pull together to stop a fanatical warrior with plans to purge the universe.

Peter Quill aka Star Lord, Chris Pratt, has a mother that loves him and apparently inspires a lot of love in those around her. When she dies, leaving behind a young, scared boy, he runs out of the hospital and is promptly abducted by aliens. Twenty years pass and we find Peter dancing and singing with a Sony Walkman that has somehow survived two decades while scavenging for a orb to sell.

Meanwhile, Gamora, Zoe Saldana, finally sees a chance to escape from the man that killed her parents and raised her to be a deadly assassin. The two meet while also running into bounty hunters Rocket, Bradley Cooper, and Groot, Vin Diesel. A somewhat unlikely crew is formed and further cemented when they are joined by Drax the Destroyer.

The group wind up learning exactly where their line is. They’re thieves, killers, not exactly the best of the universe, but even they won’t stand by and let someone destroy a planet.

Marvel movies have always had a shade of humor in them, but Guardians of the Galaxy adds more than usual. There are quips and one liners as well as gags and it makes what could easily be a dark movie significantly lighter. Which, again, is common with Marvel movies, but they take it a step further without taking away from the seriousness of the story.

The music in Marvel movies is mostly forgettable, in my opinion. You’ve got what Tony decides to blare, but the background music, besides the theme, is generally unobtrusive and forgettable. It sets the tone well, so does it’s job, but that’s about it. With Guardians of the Galaxy music played a much bigger role. Peter’s mixtape is filled with classic hits and is basically another character. This sets the stage for how music is used in the following movies, especially Guardians of the Galaxy 2, but also Captain Marvel.

Gamora and Nebula, Karen Gillan, were some of the most interesting characters of the movie, though, they contributed very little to the comedy side of things. Both were abducted and raised my Thanos so they have not had the best life experiences. Like Thor and Loki, though, they’ve reacted in different ways. Nebula seems to blame Gamora for the fact that her father prefers her. Gamora just wants to be free.

Drax with his inability to understand sarcasm and metaphor is freaking hilarious and a character you don’t see often. Rocket and Groot are wonderful together and alone and easily two of my favorite Marvel characters.

If I had to live anywhere in the Marvel universe I’d pick Xandar, though, I think Thanos ends up destroying it, so…bummer.

Guardians of the Galaxy is a nice change of pace from the mainline Marvel movies. It is still connected, but it’s so different that it shakes things up nicely and provides a needed break from the usual superhero movies.

The Guardians must fight to keep their newfound family together as they unravel the mystery of Peter Quill’s true parentage.

I was very lucky to have my parents visit us last week and while they were here my husband and I were able to go on a date. Naturally, we went to see a movie and thank goodness this was still in theaters.

I loved the first Guardians of the Galaxy and everything I saw trailer wise told me this one was going to be as good as the last. Thankfully, we were not disappointed.

I laughed more with this movie than the last, Drax, Bautista, is freaking hilarious. I did think a couple of the more emotional scenes went on too long and I actually cried at the ending.

Honestly, I really liked this movie and I’m looking forward to buying it when it comes out so I can watch it again.

Also, I need a baby Groot. 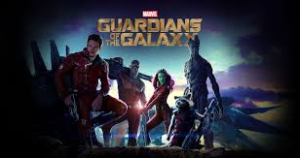 Light years from Earth, 26 years after being abducted, Peter Quill finds himself the prime target of a manhunt after discovering an orb wanted by Ronan the Accuser.

I am so glad I got to see this movie in theaters. It is AMAZING! Holy cow, I’m just going to come out and say it, this is the best Marvel movie. I know. Crazy! Who would have thought that a movie that has almost nothing to do with the main Marvel story would be the best, but it is.

Chris Pratt played the leader of the bunch, Starlord, but only kind of. Rocket, Bradley Cooper, was the brains and Bautista and Saldana were the muscle. Starlord was the glue that kept them together and it worked.

My husband, having seen Bautista perform in the WWE, wasn’t sure about his casting, but because of the alien race they made him it was perfect. In fact he provided some of the funniest moments in the movie. When he’s laughing like crazy while everyone else is afraid for their lives it’s hilarious.

I really liked how they played the villains. I liked the fact that after the hulking mass of Dax, Bautista, couldn’t defeat Ronan, Lee Pace, they didn’t even try to have Starlord take him on physically. I liked the fact that Nebula, Karen Gillan, didn’t die and you know she’s coming back. Ronan came off as a complete fanatic and the fact that he wasn’t easily killed was perfect.

The only part of this movie I didn’t like was the end scene after the credits. It didn’t give us anything about what’s to come. Unless they’ll be doing a Howard the Duck movie and I doubt that’s happening any time soon.

I can’t wait for this movie to come out on Blu-ray because it is a day one purchase.