Max Walker, an officer for a security agency that regulates time travel, must fend for his life against a shady politician who’s intent on changing the past to control the future.

Timecop is an amazing title and one I use whenever I’m making books in The Sims. It’s one I’d love to use to write my own pulp fiction novels. Alas, time is not on my side with that (my hobbies totally have nothing to do with that lol). This movie gives you everything you would expect from that title starring Jean-Claude Van Damme. The plot makes no sense and is filled with so many holes it barely stands up. There are massive explosions. An ass shot, that I sadly missed, however, I did not miss the boobs. There was also, of course, a splits shot. What more could you ask for?

All that aside, this is not one of my favorites. It never lives up to the image in my head that the title creates. It’s such a cool concept, but it comes off as a by-the-numbers story. It’s directed fine, but it suffers because of the story. Yes, yes, I know it’s an action movie, the story shouldn’t matter. In this case, though, I can’t move past it.

Timecop came in a Bluray case paired with Bloodsport so I won’t be getting rid of it, but it’s definitely not one I plan on re-watching. At least not anytime soon. 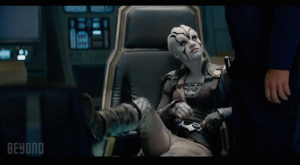 In a violent, futuristic city where the police have the authority to act as judge, jury and executioner, a cop teams with a trainee to take down a gang that deals the reality-altering drug, SLO-MO.

Recently I came across a thread that asked you to list the greatest action movies of all time. Now I wouldn’t say that the list that came to my mind was the greatest, but they’re all really good and some of my favorite movies.

Judge Dredd was on my list and I realized it’s been way too long since I’ve watched it. What if I don’t like it anymore?

Judge Dredd is one of those movies that I joke I’m going to buy for everyone at Christmas. It’s almost always cheap and there’s really no good reason for someone not to own it. I say I’m joking, but am I? One day…

A quick disclaimer, I have never read a Judge Dredd comic or watched the original movie.

Karl Urban as Dredd is such a badass. The way his face is in a perpetual frown and the fact that he barely speaks. Perfect.

Ma-Ma, Lena Heady, is an evil as fuck villain and you know this immediately because the movie starts with her having three dudes skinned alive and then thrown from near the top of a skyscraper while doped up on drugs that slowed time.

Olivia Thirlby, Anderson, provides a nice newbie to ride along with. She’s a mutant that has psychic abilities, she reads people’s minds. By the end of the movie she’s earned her position as a judge, though, I’m not sure if I’d call her a badass. However, when she invaded that dudes mind and messed with him it was pretty cool.

The movie as a whole is great and I wish desperately that it had received a sequel, but it bombed in theaters because… people can’t enjoy a graphically violent sci-fi action movie? I don’t know, but it’s sad. To add insult to injury Urban’s TV show Almost Human was canceled too.

I highly recommend this movie.